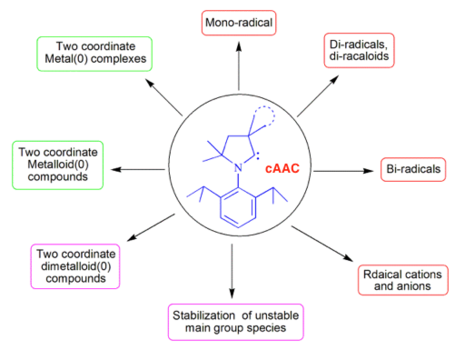 The main group chemistry mainly deals with studies of the elements which belong to the groups 1, 2 and 13-17 in the periodic table. In general, all of these elements utilize their outermost s or p orbitals in bonding. However, this particular bonding scenario of main group elements changes in case of their corresponding hypervalent compounds, where the valence shell can be expanded. For a main group chemist, it is always intriguing to thoroughly explore the unusual bonding features and the oxidation states of various main group elements when present in their newly synthesized unusual compounds. Coming from the 2nd row to the 3rd row main group elements, due to their poor orbital overlap caused by the more diffused and the larger orbital size these elements form comparatively weaker bonds in their compounds and therefore these species are highly reactive and unstable. They react rapidly even with a trace amount of moisture present in the air and also with the aerial O2 and therefore the syntheses of molecules containing these species often faces great challenges. It is always necessary to maintain an extremely inert O2 and moisture free condition to synthesize theses species utilizing standard schlenk techniques under an inert gas atmosphere in the presence of some stabilizing ligands, such as carbenes. The past 35 years have witnessed a lot of exciting developments in the field of main group chemistry starting with the multiple bonding below the first row in the periodic table, such as silicon, phosphorus and other heavier elements. Beside this, the present day applications of the main group elements in the field of material chemistr (in the form of mesoporous materials) and nanotechnology (in the form of modified single-walled nanotubes) have been revolutionary.

The chemistry of the heavier analogues of carbon, such as silicon is little more complicated due to the change in bonding and stability. As mentioned previously, molecular silicon compounds are highly sensitive to air and moisture; since silicon can expand its octet to undergo hydrolysis and oxidation reactions. The earth´s crust is rich of silica and silicates in which the silicon-oxygen bond is very stable due to the additional ionic interactions. The most stable compound of silicon is silicon dioxide. Most importantly silicon is a bio-innocent element and hence the development of chemistry of silicon containing compounds is very important. The best known use of silicon in recent time is undoubtedly as electronic devices. Hyperpure silicon(0) is used in transistors and other components of electronic devices. It is also used to make solar cells, rectifiers and parts for computer circuits.

Another very important aspect of low valent main group elements is their application in the field of homogeneous catalysis which might open up a bypass route and greener approach against the traditional transition metal catalysis.